I arrived in Laos and had to get my visa.

There was a crazy que to get the form, to get a pen for the form and then to submit and pay for the Visa. Not the best of organisation.

I hoped in a taxi and headed off to my hotel in Vientiane. After the carnage of Vietnam, and my body’s strains I decided to treat myself to 3 nights in a 4* hotel. I wasn’t disappointed! A huge comfy bed, aircon, a swimming pool and hot water! Luxury!

I didn’t plan on doing much in Vientiane while I waited for my flight to Huay Xai to go on my Gibbon Experience.

I went for a walk around the town and went to the post office, my purchase of a suit in Hoi An had left my bag dangerously full, so I decided to send the suit, and some other odds and ends home. Hopefully they arrive as I really do like that suit!

I picked myself up a Laos Sim card and the nice person set my phone up for it to work. As I was walking away I realised he had forgotten to set the language back to English!!! A bit of charades later and I had a working Phone, in English!

My aimless wanderings around Vientiane took me to the Patuxay Monument. A beautifully decorated archway with a surrounding garden and seating area. I stayed here a while just watching the world go by. 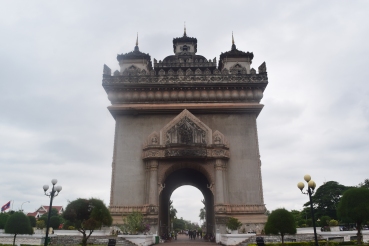 I picked myself up some amazing spring rolls and wandered by some stunning looking Wats, Buddhist temples.

The rest of my stay in Vientiane consisted of relaxing around the pool, sleeping and enjoying my 4 star room!

I walked myself back to the airport to board my flight to Huay Xai. The domestic departures terminal was under repairs so I ended up in a small porta cabin awaiting my flight! No aircon made it a very long and warm stay. The average temperature was around 35 degrees! No wonder they call it the dry season!

My plane was a tiny little thing! Propellers on the wings, the entrance to it was at the back, the door doubling up as a ladder. The plane was also half empty! A very bumpy and turbulent hour later I arrived in Huay Xai, dreading my return flight 5 days later!

Huay Xai airport isn’t really an airport but a small airstrip, its not common to fly there, hence the tiny little plane!

I checked in at my hostel and walked around the town. On my wanderings I found a huge staircase, being the inquisitive type I decided to head up them and see where they lead!

I found myself at a Buddhist temple. It as silent up there as was at the top of a hill, with orange robed monks walking around smiling at the sweating tourist that I was.

I then took a stroll down to the riverbank of the Mekong and gazed towards Thailand on the opposite bank!

I really enjoyed sitting quietly in this peaceful place before heading down to check in for my Gibbon Experience.

The gibbon experience Is a 3 day trip into the jungle with 2 nights spent sleeping in treehouses above the jungle floor.

The aim of the trip is to try and encounter the elusive gibbon.

To move around the jungle the tour combines trekking with incredible zip lines, hundreds of metres long and some over 100m high.

I was really excited by this trip! It seemed one of a kind and the following morning I met the group id be sharing this experience with.

There were 15 of us and we were loaded into pick up trucks and the adventure began.

A 2 hour ride allowed us to all get to know each other, after a brief pit stop we went off road! After fording a river we began an hour drive along bumpy unpaved roads. There were many trees strewn across the track, a testament to the recent storms they had had. 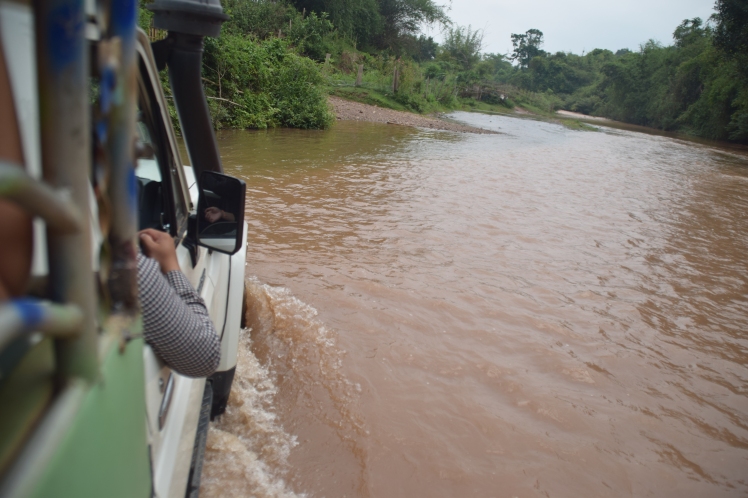 Before we knew it we were getting off the truck in a remote village on the edge of the jungle.

The small and basic village was populated by many people who help maintain the tree houses and zip lines. It was also home to the camouflaged rangers armed with AK47s, who patrol the jungle in search of poachers and illegal loggers.

Our trek began, heading out of the village and into the jungle. After about half an hour walking we stopped for sandwiches before continuing to the equipment shed where we collected out harnesses and zip gear, which included an ingenious breaking system. 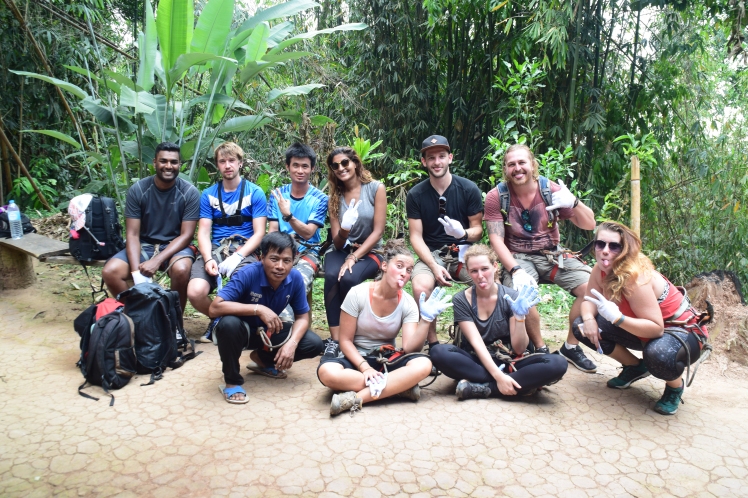 A tense game of rock paper scissors decided who got which tree house. My group of 8 (3 Canadians, 3 Germans a south African and myself) lost and got the smaller tree house.

The heat was unbearable, coupled with the uphill trek, I was ready for a nice sit-down! Getting the harness energised me again and after another 20 minute trek we arrived at our first zip line. A 200m long slow zip, to get us accustomed to the zip.

Zip lining isn’t quite as easy as sitting back and going, there are various positions to take that increase speed to ensure you get to the other side, you don’t want to be stranded half way across and have to monkey climb the rest of the way, its exhausting trust me!

The zipping was amazing, a real rush going across the jungle at great speeds and heights, it was also surprisingly tiring, the position needed for optimum speed was a core workout! I found myself wishing those 15kgs, that id lost travelling, back! The heavier you are the easier it was to get across.

More than once I had to pull myself along the final few metres, not easy with a broken finger on my dominant hand!

After 6 zips we trekked another 45 minutes to our home for the next 2 nights! A 40 M high, 3 story tree house! The house was accessed by zip line! 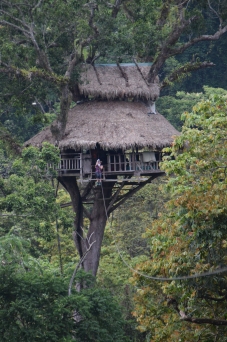 I was really surprised by the scale of it! It was complete with shower, sink and toilet!

Being the solo traveller, I got the penthouse floor to myself! The beds were a basic camping mattress on the floor with a much needed mosquito net covering it.

After dinner was eaten darkness fell and I went to bed, preparing to be up early to try spot the gibbons.

After 5 minutes in bed the sky lit up with distant lightning followed 20 seconds later by the rumble of thunder.

The gap between the two kept getting shorter until it was only 3 seconds between the two, they came no closer, there wasn’t even much rain or wind, so I t was great to watch from the distance!

I woke up with the sunrise and sat silently searching the jungle below for the gibbons.

While I didn’t see them, their distinctive calls could be heard in the distance.

We spent that day trekking around the jungle, exploring the various zip lines and tree houses on the jungle had to offer.

Some of the houses were just spectacular! Sitting atop a single tree, with a 100m zip line to and from it.

We were even lucky enough to visit one of the houses that were still under construction and it was great to see how they were made!

After lunch (and 10km trekking) I decided to enjoy the peace and serenity of the treehouse and stayed back to enjoy a lovely Read. Reading while the air is filled with the insect and bird calls of the jungle was just amazing and I found it was peaceful and relaxing!

That evening, when darkness fell and dinner was ready to be eaten, our treehouse was invaded by thousands of little moths. They were absolutely everywhere, for nearly an hour we all had to take shelter from the things! They apparently live only for a few houses, and the mass of dethatched wings on the floor was testament to their short, but annoying, lifespans!

Dinner was eaten and a great sunset was enjoyed and I retired to bed again.  As before the thunder and lightening came, this time bringing with is Wind and rain!

The whole tree was moving at one point, the rain soaked through the roof and one half of my bed was soaked!

The lightening was also very close, with almost no gap between the two!! I packed up my bag and awaited the call to evacuate the tree house, this never came and as the storm passed sleep came.

I learned it the morning those downstairs were sleeping with harness close to hand!

No gibbons in the morning and no calls was a disappointing end to treehouse life as we began our trek back to civilisation. There was still time for a bunch more zipping enroute! 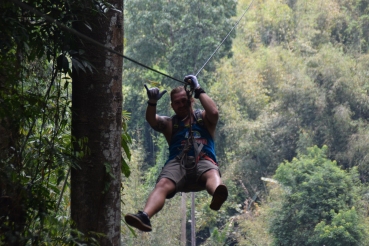 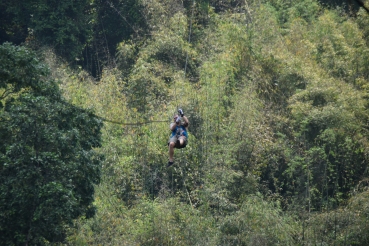 I managed a zip line straight out of a slapstick comedy scene, my zip took me right to the platform, my toes making it, only to slip off and I start sliding back along the line, my break didn’t work and by the time I stopped, I was faced with a 30m monkey climb! God that hurt!

We played word association games as we made our trek back to the village and bade a fond farewell to the jungle!

I got back to Huay Xai absolutely exhausted and in need of a good nights sleep!

I had decided not to fly back to Vientiane but to instead take a 2 day slow boat down the Mekong river to Luang Prabang.