The bus from Da Lat to Hoi An was very long and very bumpy. Lee and I were places right at the back. The 3 seats allowed us to spread out at bit but we were in constant fear of someone coming on claiming the 3rd seat! That would have made for a very squashed trip!!!

We arrived in Hoi An at 6am 14 hours after leaving Da Lat.

We hitched a ride to one of the hostels of the other passengers to save money and began following the map to our own. When we got there we realised it wasn’t the correct hostel!!!!!!

After some roadside research we found ours, on the other side of town!!! Frustrated we picked up our bags and began to walk. It was so early nowhere was open and we hadn’t eaten since the previous days breakfast so we were quite grumpy.

We found a café that while not serving food, sold drinks and stopped for some tea. When we finally got to where the map claimed our hostel to be, there was absolutely no sign of it! Some asking around eventually bore fruit, it was another 1km up the road!!!

By this time the sun had started poking its head out and when we arrived at the hostel we were soaked in sweat! All we wanted was a sleep!!

The hostel itself was just fantastic. A purpose built, newly opened hostel. Complete with a pool, bar and hot showers!! Perfect.

We were 2 tired, dirty backpackers, faced with 5 hours until a bed opened up. We did what every sane person would do. We jumped into the pool and ordered a few beers! Then we ordered a few more! Before we knew it we were making friends with others around the pool.

One in particular Ollie, a bearded Londoner joined in fantastically with the imaginative and ridiculous insults Lee and I would hurl at each other.

Before we knew it, it was dinner time. The perfect time for a Pub Quiz. The hostel fantastically organised events each night. While we didn’t win the pub quiz we must have been close! Bonus rounds included Strawpedoing a beer (Lee was robbed) and blindfolded acting, my performance was Oscar worthy I think.

Post quiz it was time to go out. Sceptically I went along to Tiger Tiger, the go to place in Hoi An. Nothing like its UK counterpart. It was just a bar, filled with backpackers. A game of beer pong followed. The night ended in Tiger Tiger 2, where I sat talking a girl who bizarrely went to the same school as me and knew my sister! Talk about a small world!

The following day was a bit of a write off. The lack of sleep and big night out had caught up with me and I admit most of the day was spent feeling sorry for myself. While I still forced a few beers down my neck, I was to tired to take part in ladies night! Lee however was out all night! Brave of him as we had a 4am wake up to go Stand up paddle boarding to see the sunrise.

Predictably when 4am rolled around Lee was having none of it, having only got in a few hours before!

I met Ollie and another traveller named Mark downstairs and we headed to the beach.

Ive not had good luck so far with sunrises, I get up and its cloudy. Someone was smiling on me this time!! We got onto the water on our board and paddled out 2km. Much of mine was spent sitting after a big fall early on!! 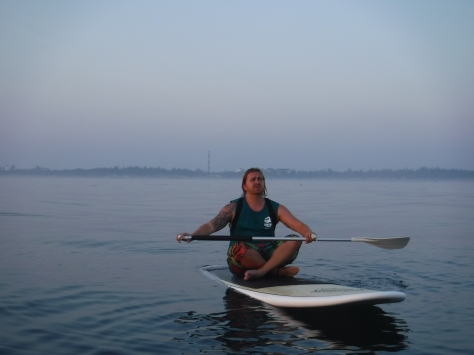 The sunrise was absolutely spectacular. The water was glassy calm, there was no one else around and few clouds in the sky! Absolutely worth getting up for! By the time we had finished our post boarding BLT and Beer it was still only 9am so we decided to head into the town. 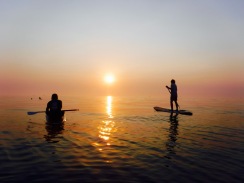 Hoi An has an old town area, this is a Unesco world heritage site. Beautiful preserved old buildings and bridges. All painted and maintained in the same way. Hand made lanterns litter the space above the streets and its stunning. 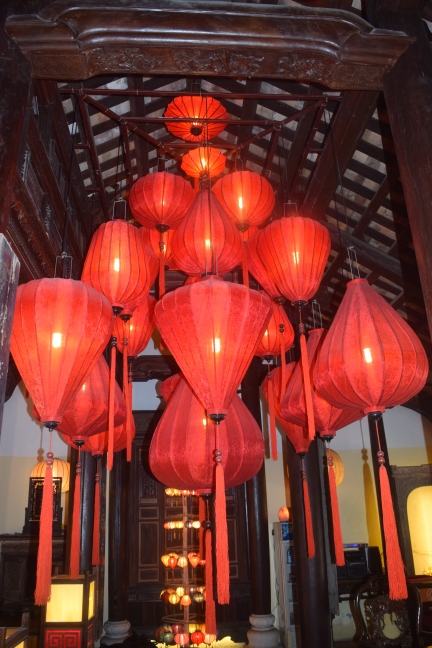 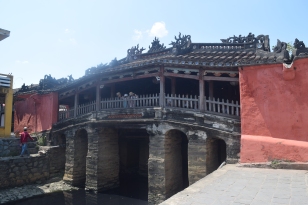 Hoi An is also famous for its suits. While at my hostel I got talking suits to a young Belgium entrepreneur. He spoke to me about his business of taking orders for suits from Belgium, $1000+ and outsourcing to a tailors in Hoi An.

The cost of the suits in Hoi An is tiny compared to at home, but the craftsmanship on them are fantastic.

I felt that at 28 it was probably time for me to own a suit. A nice tailor-made one at that. Knowing nothing about suits, I took Tom, the suit expert along who chose all the colours and material and I was measured up. I was to head back the following day for fitting! 24 hours to make a suit and a shirt!!! Wow!

Ollie was leaving the following day so a few drinks were called for, by the time I got to bed id been awake 23 hours!!! Ooops

I awoke the next morning eager to get my suit fitted. The hostel was running and all day pool party with drinks offers all day. Well they went to all that trouble, it would be rude to not join in!

When 3 o’clock came around and it was time to get my suit fitted I was a bit wobbly on my feet! Not sensible when there are a group of ladies around you with pins!!! I was really very happy with what they had made though! It fit great and I love how it looked! I looked presentable for the first time in 6 months!!

I was expecting to back the following day to collect the suit, however they asked me to go back in 3 hours while they made adjustments. The speed that they worked was really impressive. Back to the pool party I went, more games and drinking, at 6 when I went back again I really wasn’t in a great state. I’m sure they have seen it all before! 😃

The pool party turned into another trip to Tiger Tiger, this time instead of beer pong, we played jenga.

Another great night ensued with some really great people!

Feeling utterly awful the following day, lee and I took a wander down to the beach and enjoyed some great views of boats and rice fields.

When it came time to leave Hoi An, I was a broken man, I had no voice, my broken finger had been knocked about so many times it was probably more broken than before. However I had an amazing few days here!

Having been quite restrained over the previous few months due to diving, it was great to just let loose with some really great people. The hostel was the perfect place for that!

Saying that there is way way more to Hoi An than just drinking. Its a beautiful little town with an interesting history. Id have loved to stay longer.

That counts double for Vietnam, Hoi An was my last stop, my 15 day visa was up. As I boarded my plane for Laos I swore I would be back!