After an incredible week in Komodo I landed in Kuala Lumpur for a 5 days.

I had initially fancied just 3 days here but the way my flights fell meant I had 5, not quite enough time to see KL and explore Malaysia.

I opted to just hang around KL for the whole time, a chance to catch up on some much needed rest and do some shopping. I hadn’t really spent much time in big city’s since Delhi nearly 5 months before so I was keen to replace a few bits that had broken and gone missing on the way.

So I headed for a mall, to get new vape gear, new earrings, a new wash bag, some boxers and fix my Anklet. Well after taking half an hour to get to the mall, a further hour walking around it, I left empty handed. There was nothing at the mall for me, well not in my price range!

Within seconds of getting off the train away from the mall I found myself at the Famous Central Market, here I was able to pick up absolutely everything I needed! Who needs big bustling malls anyway!

While I was here at the Market I found a 3D art gallery which looked great fun, I went in to get my ticket and the lady behind asked if I was alone, when she learned I was she told me to come back in an hour when should could come round with me and take my photo! Result.  I filled the hour with a nice relaxing massage before heading back to the gallery.

All the paintings were done by local artists and looked great, however the real treat of this gallery was when you looked at the photos. The lady made me do some great poses and snapped some really amusing photos. I had a great time playing around this amazing artwork! Interactive art is great! 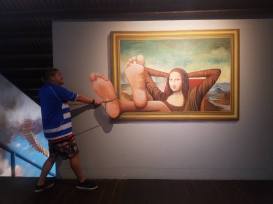 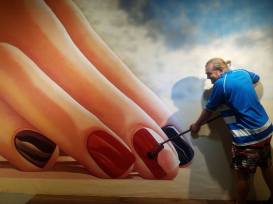 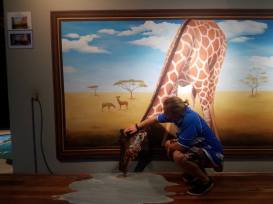 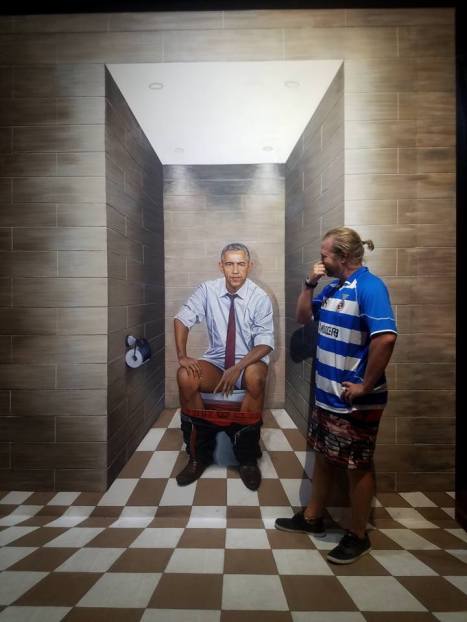 I spent my next day wandering around the city and heading up the giant KL Tower, one of the top 20 tallest towers in the world. Before I went up the tower I had a very bizarre experience of visiting an upside down house outside the tower, it was exactly as it sounds, a house upside down! The inside was the wrong way up and I was walking on the roof, Very strange.

I paid I bit extra so I could get right to the open air top and wasn’t disappointed by the views. I got some spectacular views of the city and in particular the famous PETRONAS towers. 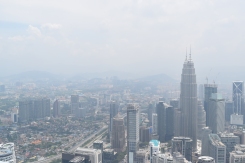 The highlight of the tower for me was the Glass boxes protruding from the edge of the tower. It was very disconcerting stepping out onto the glass and seeing the 300M drop below you! But it made for some fun photos, even if my heart was beating like the clappers!

I took advantage of being in a developed city by finding a TGI Fridays and having a lovely Rack of Ribs and huge milkshake!!

The next day I wandered over to the Petronas towers and spent a lovely few hours walking around the park outside it, It was so hot I was spending a lot of that time hiding in the shade! 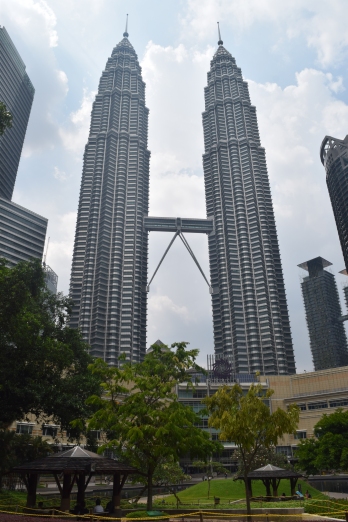 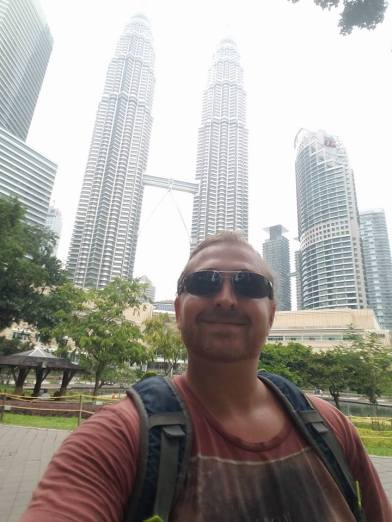 When the heat got too much for me I decided to head indoors and went to the Aquarium. As your all sick of hearing I love diving and the underwater world so I do like a good aquarium. The KL is pretty good but not a touch on Sydney’s so I was a bit disappointed but it was still a fun time killer looking at all the pretty fish!

I spent a couple of lazy days at the hostel, writing, reading and watching TV and I must say I enjoyed that as much as the exploring, sometimes its great to have lazy days!

I spent my last evening in KL wandering around looking at the bright lights of a busy city. I treated myself to a cheeky nandos aswel!!:D

By the time I got to the airport I had 1 ½ before my flight, loads of time! I checked in and went to drop my bag off, only to be told I wasn’t aloud on the aeroplane without proof of an onwards ticket from the Philippines!

Throughout my trip ive just turned up places with no plan, this was the first time it had been questioned. With the time ticking away before my flight time I had to do some very fast searching and planning on when to leave The Philippines, where to depart from and where to go!

I found a flight that seemed to match and booked it, I dropped my bag off with my new flight proof and made my flight with minutes to spare!

After a horribly bumpy flight I arrived at Cebu City in the Philippines. I’m here for 29 days!!!