I decided the rest of my trip would be spent along the beach’s.

As I mentioned at the end of my last post, the heavens had decided to open in Sri Lanka, after a 3 month drought. The locals were really pleased, me not so much.

I decided to leave Tangalle and head along the coast to Mirissa, id heard some really mixed reviews of this place so decided to make my own opinion.

I had agreed with a Tuk Tuk driver the day before that he would drive me around and drop me off in Mirissa but would show me a few stops along the way.

The first stop was to the Murkiligala cave temples, these were exactly what they sound like, some cave converted to Buddhist temples. There were 5 in total and each featured a big colourful statue of the Buddha and some colourful wall art, remarkably well preserved considering it was hundreds of years old. It was very impressive however ive been culturally spoilt by the cave temples of Ajanta and Ellora Caves in India. 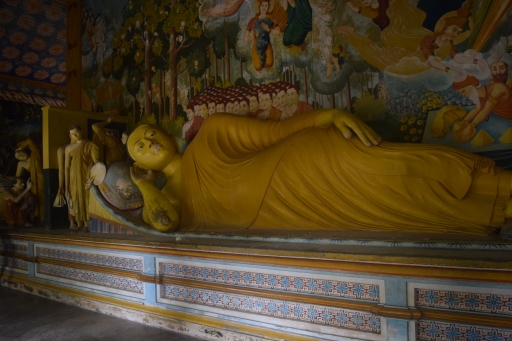 Our next stop was at the “big Buddha”  again its exactly as it sounds, a big Buddha statue next to a small temple. It provided some good photo opps but getting there also coincided with the heavens opening again so it was slightly rushed. 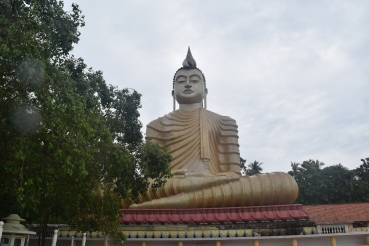 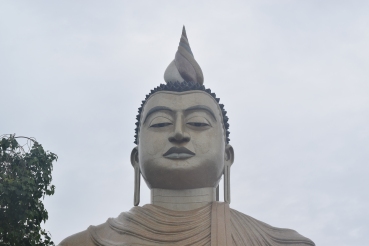 Finally we stopped at the “Blowhole” a section of the coast where the waves are forced through a small fissure in the rocks causing it to blow out of the ground like a geyser. The wannabe photographer in me was salivating at the opportunities for some great photos here. Unfortunately I think I was there at low tide as despite an hour waiting the “Blowhole” went once and only about 4 feet, damn. 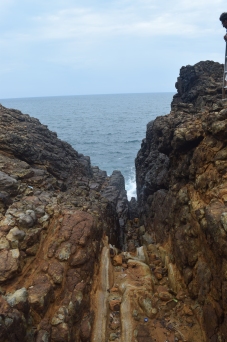 I got to Mirissa and checked into my fancy hostel, well not fancy, but it had aircon so that was a win. The room in the hostel was actually pretty nice, the mattress was nice and soft and the bed itself was bigger than your average hostel bed. Combine that with the aircon and I think luxury sums it up. Frightening how easily little luxuries become such a big deal.

As is the running theme to this blog Mirissa was cursed with a lot of rainfall so I didn’t get much each time and made the most of the luxury room. I met some pretty cool people in the hostel so it wasn’t so bad being stuck inside so much.

The main reason for me coming to Mirissa was that its from here you can board a boat and go looking for the largest creature of earth, The Blue Whale. From southern Sri Lanka you can have the easiest opportunity to see these ginormous animals as they come reasonably close to shore.

I shopped around for the right company as the industry can be a bit unethical, chasing whales and baiting the boat. I didn’t want anything to do with that sort of practise so found the company Raja and The Whale. A bit more expensive than other boats but whom practise ethical and whale friendly watching. The use only their knowledge of whales and the local ocean to find the most likely encounter areas.

I was up at 5am to get to the harbour and board the boat, I was provided a free sea sickness pill as the Indian ocean is very choppy and boarded my two tiered whale watching boat. I had a nice surprise on the boat as I bumped into someone I had met in Ella previously on my travels. So I had some company, now all I needed was whales.

After about an hour on the boat we saw our first good sign, a spout of water about 700m away. We had been given a talk on the whales we might see and how to spot them. On my previous whale watching trips id searched for Humpback whales, these are very playful and energetic and will breach (jump) out the water, blue whales simply cant and don’t do this. They come to the surface to breath before going back down to eat. Because of this they stay mostly submerged so despite their size they aren’t easy to spot, the blast of water from their blowhole the best sign.

Well we turned of the boat and waited to see where this whale was going to, the boat was able to predict where they would resurface and get the boat there before the whales came back up, they did this superbly so we go close to the whales to see them, but not so close that it was frightening to them. Other boats in the distance weren’t doing this and as soon as they got close to the whale it would go back under. I was able to get some fantastic photos of the whales we saw (5 in all) before it was time to head back to shore. There was still time to stumble upon a 1000 strong pod of spinner dolphins, we were right in the middle of them with dolphins going under the boat, breaching right next to it and generally putting on a great show for us!

I left Mirissa a happy man having seen the whales and dolphin. Id also gotten some cracking photos which was the icing on the cake.

Next stop was Unawatuna, another beach town. Enroute there I stopped of at Koggala lake to go to a cinnamon farm and go for a nice boat ride. I even managed to do some “fish feeling” putting my feet into a pool filled with fish, the then proceeded to eat my feet! A very strange experience! 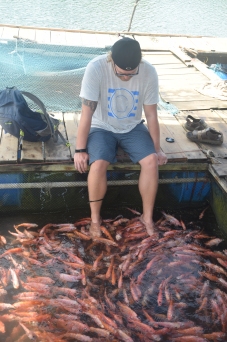 Id planned to do some diving in Unawatuna so on arrival I instantly walked to the beach and booked myself in for 3 dives the next day. As I wrote about earlier in the year, I had a pretty nasty dive experience last year so I was a bit nervous to get back in the water again for some deep ocean diving.

I decided to treat myself to a nice Swedish massage to relieve the stress, it also got rid of some of those pesky knots in my shoulders from carrying my backpack so win win.

I was up bright and early the next morning and ready for my dives. I got kitted up and jumped on the boat for the 25min drive to the first site, a 300 year old shipwreck down at 27M. Id never done a wreck dive before so I was really excited, however I hadn’t attempted a deep dive since my accident the year before so amongst the excitement I was a bag of nerves.

I needn’t have been, as soon as I was in the water and descending the excitement won out and was in the zone. The wreck was great, the visibility was quite good considering what I had heard about Sri Lankan dives, and I was able to make out various parts of the coral covered ship, its bow, anchor, port etc. In areas the ship resembled a rib cage of a giant skeleton. Throw in a few nice colourful fish and it made for a fantastic dive.

The other 2 dives were less eventful and proved what I had heard about Sri Lankan diving to be true, little coral, few fish etc. But it was still great to get 2 more dives under the belt and helping me to improve my technique aswel as getting the confidence sky high again. I finished the day exhausted but very proud of myself.

Another Tuk Tuk ride saw me in Hikkaduwa. But not before I got to see the lovely Galle Fort. Its a seaside fort and was built in colonial times. Its got a lovely walk along the ramparts, fortunately for me the rain had gone away for this meaning I got some nice blue skies. 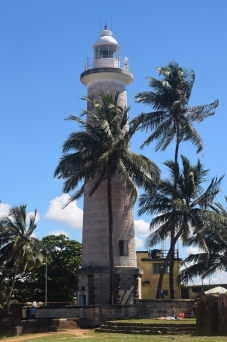 Hikkaduwa is another beach town. I must admit by this point I was a bit over the beach’s, I don’t surf and couldn’t afford to do any more dives so it was just about relaxing by the sea, great for a few days but I get restless after that.

So in Hikkaduwa I went for some long walks into the town. On one of these walks I went past some memorials for the victims of the Tsunami in 2004 and to a photo museum documenting the tragedy. 40000 srilankans died on boxing day and Hikkaduwa was hit quite badly, a train travelling along the coast got the full force of both waves killing over 1000 passengers, the largest rain related death toll ever recorded.

It was a very sad and sobering experience seeing these photos and reading survivors stories. Entire family’s wiped out, parents losing all their kids etc. Very sad.

I jumped on a couple of trains to head back up to Colombo for a few days before my departing flight.