My initial feelings on Pushkar were spot on.

We met up with some other friends from Delhi the next morning and went off for a walk around the Bazaar and for some breakfast. We found a fantastic restaurant to eat in called Nirvana where we stayed for a few hours eating, drinking and enjoying the wonderful views from the rooftop restaurant.

Pushkar is a holy city surrounding a lake. The lake is said to have been formed from the tears of Lord Shiva following the death of his wife. It is one of the 5 sacred pilgrimage sites for Hindus. As such alcohol is prohibited within a 3 km radius of the Lake. However our restaurateur was quick to offer us beer which went on our bills as “Apple Juice”

Erin, (a Canadian girl whom id met in Delhi) had rented a Scooter for 24 hours and kindly offered to take me out on to see the more rural parts of Pushkar. 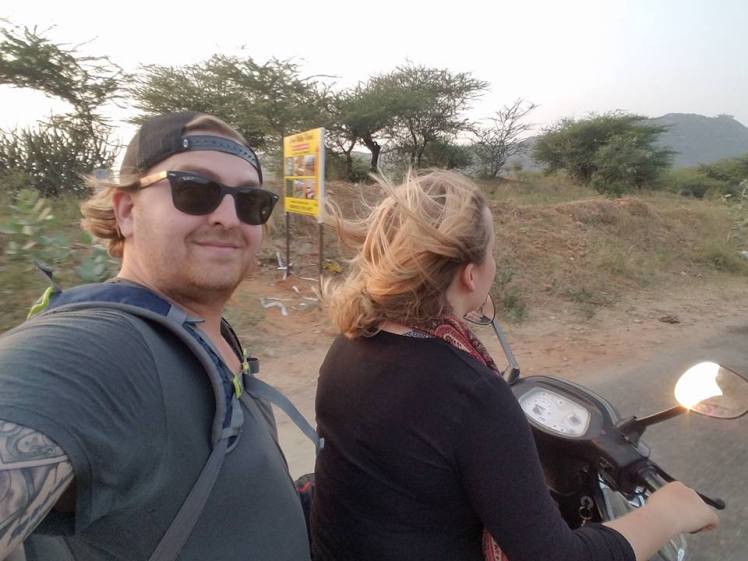 We drove down some very quiet and uneven roads to try and find the Aloo Baba. A man who shunned all foods except potatoes.

After a half hour drive we found him, although we needed to ask for directions several times, each time we stopped we were surrounded by kids who all wanted to say hello. One got a bit to brave however and hit me on the back as we drove off, probably to win man points among his friends.

The scenery outside Pushkar was amazing, beautiful hills and mountains with lots of monkeys, cows and Camels wandering free.

When we got to the Aloo Baba it all started getting a bit strange. A man in orange with a flowing beard met us and introduced himself as the baba, we explored his house/temple before being invited to sit with him and his friends. They were all obviously very very high. We proceeded to make awkward small talk before making our excuses and leaving. The Baba had told us that all he ate was potatoes, well potatoes and Bananas. FRAUD!!!! He should be the Aloo and Banana Baba!

We drove some more to a temple at the top of a mini mountain, well we drove to the bottom. We decided against taking the £1 cable car up and decided to walk to the top to see sunset. Unfortunately it was a lot higher and I’m a lot more unfit than we thought, so although we made it to the top, we missed sunset.

That evening we all went back to Nirvanas for some great food. Pushkar specialises in Italian food so it was pizzas all round.

A few of us got some Bhang Lassi at the end of the meal, a lassi is a yougurty drink popular in India. Bhang is one of India’s more herbal entertainments. While I had a few sips I decided to wait and see how the others were before having my own. On the walk back one of the lads from Delhi said to me “its shit Dan don’t bother I cant feel a thing” by the time we made it back to the hostel there were fits of giggling and the next morning my friends described to me feeling like they were being held by a giant hand through the night. As Pushkar was so booked up 2 of my friends were sharing a double room so we had a few jokes about the “Giant hand” being the other friend spooning. 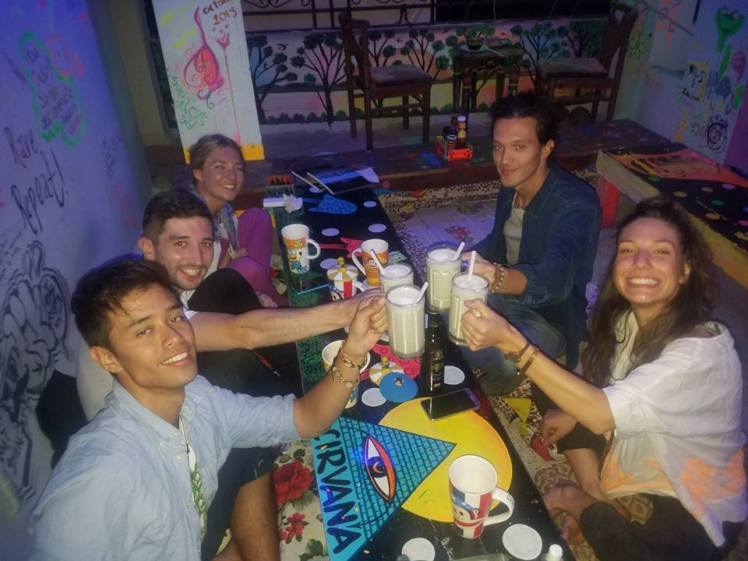 Erin and I decided to go out on the bike again the following day to see some more scenery. All went well until we got a flat tyre 2kms out of the city. As the bikes were only ment to carry one person I walked back while Erin got a lift for fear the 2 of us on the bike may null and void her deposit, It was a great walk, but one done in baking sun which knocked me for 6!

That evening we were back at Nirvanas for more food and Bhang. I had a bit more of the lassi and Bhang chocolate balls. I’m not sure I had enough as I still didn’t feel the giant hand!!!

I spent my final day in Pushkar by myself as everyone had moved on, it was a nice day of walking around the sacred lake, exploring the camel fair and getting a massage.

I arrived at the wrong time for the fair, the whole time I was there they were setting up for it, it officially started the day after I left! Although walking around it was weird to see the similarities between and Indian fairground and the Australian ones I had worked on in the past.

My massage was a strange experience. An Indian man spent around 90 minutes effectively beating me up! It wasn’t quite a relaxing spa day but it did ease a lot of the tension in my back and shoulders!

I went out for dinner that evening and managed to smash my toe climbing up some steps! My god it hurt. I can still feel it now! I hobbled back to the hostel and improvised a splint with a hairband and match box and spent the rest of the day in bed!

The next morning saw me on a train to Jaipur, the pink city. I was meeting back up with people from Delhi and we were all staying in the same hostel again.  I dropped my bags at the hostel and went with them to the Monkey temple. It was a nice walk over some hills to get there (although I was still hobbling a bit) we were joined by a group of kids who sung and dance the whole way. Chris, a lad from Essex, turning into the pied piper singing and dancing with them, more joined as the went along and by the time we got to the temple there were around 10 kids all copying his dance moves.

The temple itself was filled with monkeys, big ones, small ones, babies and mothers. The fear of rabies kept me from getting to close but it was certainly and experience seeing the monkeys among some old ruins. 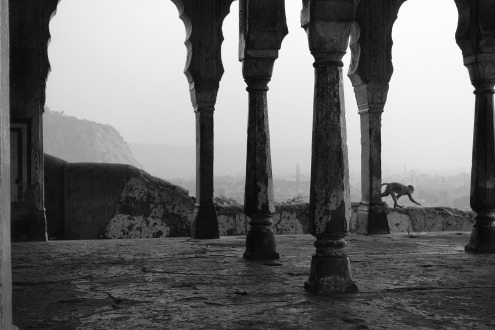 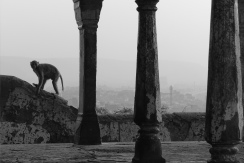 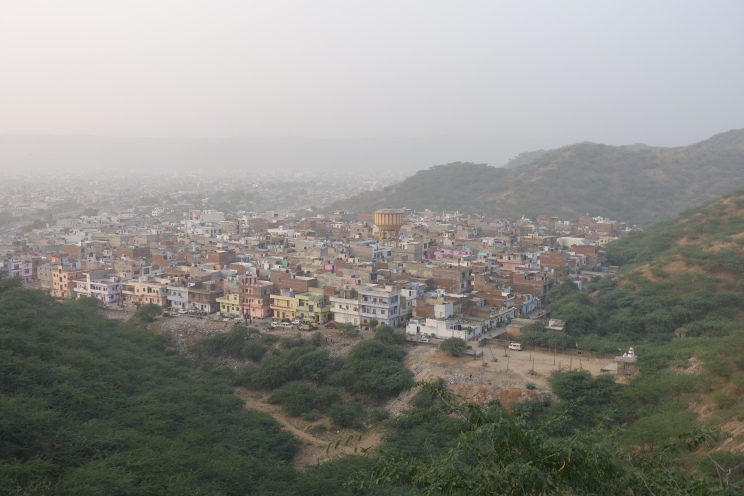 We awoke the following morning to an announcement that the 1000 and 500 rupee notes were being immediately removed from circulation. While we were able to change what we have at banks and post offices, they couldn’t be used in shops etc. Seeing as out of my 4000R that I had, 3500R of that were 500 notes, life became quite difficult. Especially as banks, ATMs and post offices were now closed for 2 days!

We explored the beautiful city palace before going to Jantar Mantar an area filled with old astrology structures. Lots of small structures all serving a purpose when divining from the stars. I couldn’t make sense what anything did but they were really beautiful structures and I’m sure they worked!! 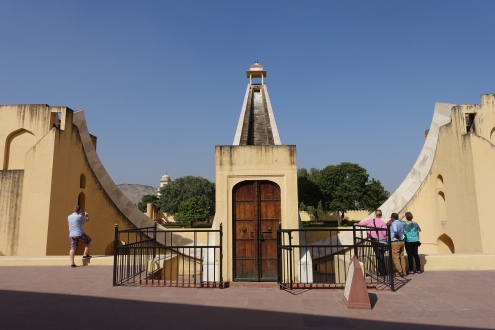 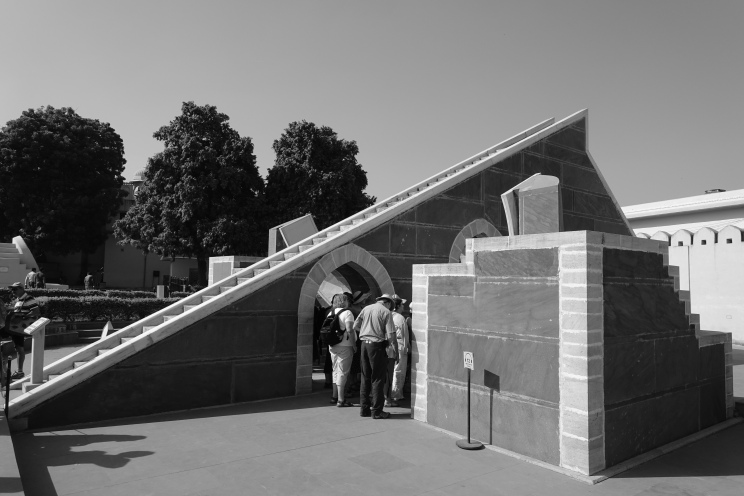 A quick visit to the a building with the most beautiful facia where women used to have to sit to watch the parades that would go by on the main road it overlooked. It was really nice walking through it and provided some great views of Jaipur.

While walking to find food we got caught up in a Sikh parade. We are still not sure what it was for, but everyone was dressed in formal colours complete with Swords and we got some great photos, as well as being handed some free curry!!! 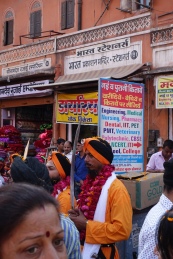 I have 4 more days in Jaipur now to decide where to go and what to do next!!!!