So here I was in Airlie Beach. I fell in love with the place instantly.
How to some up Airlie Beach, well its a small town in Queensland on the east coast of Australia. Its called the gateway to the Whitsundays. Its a transient which effectively works as a port for the liveaboard ships to dock and depart on their trips around the beautiful Whitsunday islands.
As such its hugely popular with tourists and backpackers. People will come for a few days, depart on their boat, return for a few days and move on. Due to the transient nature of the town there is a constant flow of new backpackers too meet.
I instantly decided I liked the place and wanted to look for work. We were very fortunate to arrive when we did for a number of reasons. The first being that we arrived relatively early on in the season meaning there were still jobs open, secondly as we beat the awful weather, but more on that later.
Now for those that have read all my previous blogs you will know my background is in care work. Now theres not many opportunities for this while on a working holiday visa so I found it very difficuly finding work,
“do you have labour experience?”
“no”
“how about bar work experience?”
“no”
“ummm what about waiting?”
“nope”
This was how so many conversations went in my first fruitless few days job hunting. Its that old problem of having no experience in a very saturated market.
Fortunatly the guys id been travelling with had got experience and got a job at a chain restaurant called “Hogs Breath Cafe” They put in a good word for me and I found myself working in the Kitchen washing plate. It sounds boring as hell but I really enjoyed it, I was able to show them I was capable as was aloud to start making salads, desserts, prepping food etc. 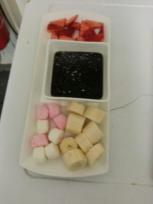 Now for those of you that haven’t working in a busy kitchen before, its hectic and its crazy but its also exhilarating. Its so fast paced your shift fly’s by, there’s not a moment to stop and think.
So I had the job sorted. By chance id ended up in the YHA hostel which turned out to be one of the best hostels around. I met a few other people who were also working and living in Airlie and got myself settled in.
The people I met in Airlie certainly made the place what it was. They were just simply amazing people and fast became my backpacking family. 3 English guys, 2 Australian guys and 2 English girls. My Airlie family.
This family was often a bit bigger depending on some of the transient backpackers coming and going.
My days would be spent working and my evenings spent drinking and partying. I have a very distinct memory of being in a club called Mama Africas with my friend Todd, having just worked a long day and pointing out to him we had lived the same day for the past 7 days. Work drink party sleep work drink party sleep. That was also the night Todd got cock blocked by a guy with 1 arm, but I wont embarrass him by telling that story.

I had found my new Airlie family in time for Christmas, my first Christmas away from family. The amazing people id met made this such a wonderful day. I got myself a Santa outfit, well Santa in shorts and we went along to the Airlie Beach Lagoon and spent the day enjoying the sun, a very surreal experience for Christmas. Our evening was spent playing drinking games and partying. We had adopted an older gentleman into our group, a really brave man who had planned for years to go travelling with his wife who had sadly passed away before they could go. So he went alone. A 50 something man living life, enjoying the hostels and having Christmas with drunk 20 something year-olds. At one point he got so drunk he passed out, we had to keep checking he was still breathing. 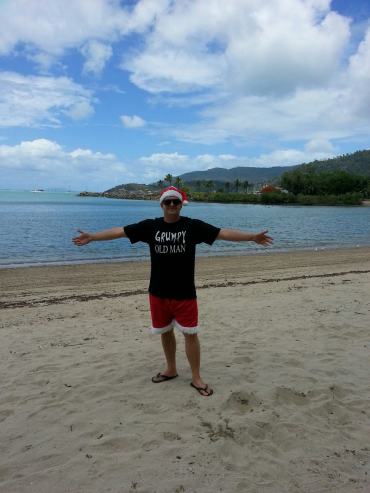 Now knowing my mother reads this blog I wont go into too much detail about the debauchery and drinking that went on in Airlie but safe to say its probably shortened my life by a few years.
In my family we have a boxing day tradition of going to the cinema. I didn’t want to break that tradition just because I was on the other side of the world and 400km from the nearest cinema. We still had our little camper for another week so Sophie Sam and I decided on a road trip. Off to Townsville for a Nandos and too see Les Miserables. We had such a good road trip, going past Giant fruit along to highway.
New year came and went with more of that drinking and debauchery I spoke about earlier. We realised that we had a few days to get our camper to Cairnes to drop it off. We were still about 9 hours drive away from Cairnes. I had a few days off and Soph had decided to move on from Airlie so I drove up with her and dropped off the car and said our fond farewells. Now I hadn’t told everyone I was coming back, deliberately. We had booked a day Ocean Rafting for Sams birthday and this was to be a big surprise so me turning up just added to it.
Ocean rafting is a small boat with a big engine, you can sit on the seats or on the side of the boat, we chose the side of the boat, held on tight and had a great ride. It took us out to Whitehaven beach, Whitehaven beach is a wonder, the sands are white, I’m no scientist so I couldn’t begin to explain why but they were used in the Hubble telescope and didn’t get hot in the sun. They also make for the most amazing photos! We spent the day swimming after stingrays and generally messing about before another exhilarating ride back on the boat. 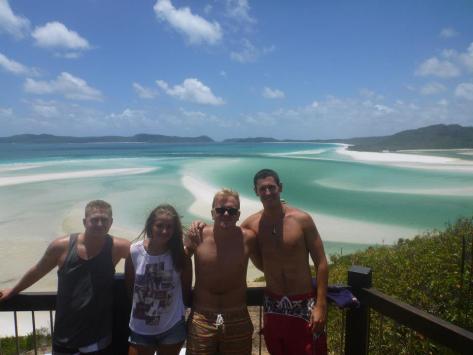 India, one of my Airlie family, worked at the hostel and was able to sort me out doing some cleaning in-between kitchen shifts to get me free board. We were on a rota, me in the afternoon, her in the evening. As she also worked in reception we were able to take advantage of that to get cheaper excursions, be that sea kayaking or jet skiing. Todd had his own Car which helped us get out and explore the areas around Airlie, there were some good places to swim and a few quiet beaches, one of those beaches was the scene of my favourite series of photos ever. 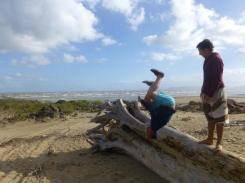 Todd and India had moved into their own places and I was looking to do the same. Greg worked on the boats, Panda worked on the boats, Sam had head home. I was ready to settle in for the long haul.
Sadly all good things come to an end, the beginning on the end was marked by the mother of all storms. We only got the tail end of it, on the news we say towns flooded and even crocs swimming down main roads. But the tail end smashed up Airlie. I walked to work the next day too find around 8 ship wrecks on the beach’s. The storm had knocked out a telecom tower so there was no internet or phone signal anywhere. I never realised how reliant we are on the net. Cash machines didn’t work, EFPOS didn’t work, there was no way to pay for anything unless you were lucky enough to have cash from before the storm. Those were a hungry few days! 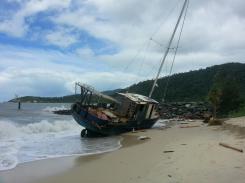 Now the storm had wrecked some of the surrounding towns and the boats weren’t going out until it calmed, this meant no tourists, this meant no work for backpackers. My shifts went down to a few hours a week and India got laid off. She was also suffering terribly from homesickness so she put plans in place to go, Todd was heading to Canada so was going back home to Taree. I was planning on heading north until Todd offered me a lift to Taree and a road trip back down the coast. I agreed but asked them to wait a few days to allow me to head out on a live aboard boat trip.
Now the livaboards are what brings people to Airlie, they are party boats, sex booze and boats. I was quite looking forward to it having heard all about them from the friends that work on them.
So I turn up at the pier, see group after group of beautiful women going past getting excited, I see Panda walking to his boat followed by a group of stunning people, he gave me the finger as he passed. Finally I meet my group…………… 3 other backpackers and 3 family’s…………………. ouch.
Ok so I hadn’t booked a party boat, my mistake, id booked a diving boat. Id never dived but oh well when in Rome.
It was on the boat I got my first taste of diving, and I loved it. Wholey completely entirely. It was the most fun and peaceful thing ive ever done. Again to those that have read all my blogs and heard about my experiences with the sea this may come as a huge surprise but I fell in love with it. Its so quiet under the water but so peaceful. So beautiful, so colourful. Just amazing. If you have never dived I urge you with every fibre I possess to try it. I saw turtles, I saw sharks I saw schools of fish so big you were totally enveloped.
I took every chance I got on my 3 days on the boat to dive. Forget drinking sex and partying. Id found diving.
Back to dry land and I finished my trip and said goodbye to Airlie Beach and embarked on a road trip to meet Todds Parents in Taree. We drove south, we did 100KM diversions to see a giant lobster statue, we stopped in towns and played 52 holes of mini golf. You know typical road trip stuff.

A few days experiencing Australian hospitality in Taree before we all went to Newcastle for a night out. Now Newcastle ticked off another first…. One of Todds mates had just left his student house, however he still had keys and everyone had left for the summer, so we effectively squatted there for a few nights, I’m sure they never realised! Newcastle was good fun , we went to see the football team with the mighty Emile Heskey upfront (he even won me $70 by scoring first) before heading on a night out.
Finally it was time to say goodbye to Todd and India. I was off to Sydeny, India back home and Todd to Canada. It was pretty gutting boarding the train and saying goodbye. We had only known each other for 3 months but in that time they had really become family. Shared some great memories, forgotten great memories and just had fun.
I wasn’t sure how anything could top my time in Airlie and feared my trip had Peaked right at the beginning.